Comparison of a biphasic bone ceramic to anorganic bovine bone for sinus augmentation 28,35% average share on vital bone after 6-8 months.

Sinus augmentation (sinus lift) is one of the most commonly performed bone grafting procedures for patients with bone loss in the upper jaw. A study* compared a biphasic bone ceramic to anorganic bovine bone for sinus augmentation. The outcome of that study has shown that the vital bone formation was a bit higher in the BCP-grafted group (28,35%) than in the ABBM-treated sinuses (22,27%). These results shows the efficacy of BCP compared to ABBM (anorganic bovine bone matrix). 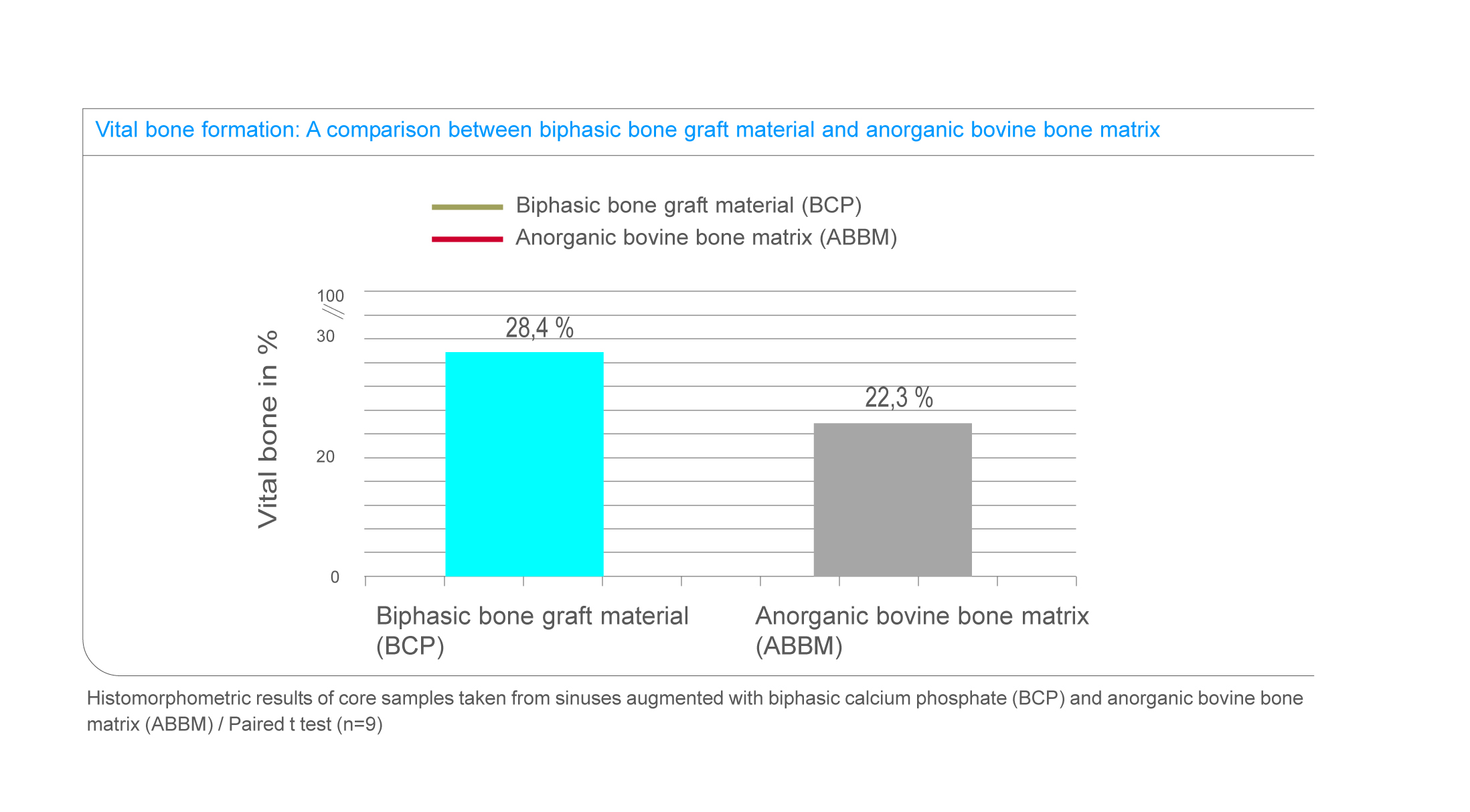 Abstract: This blinded, randomized, controlled pilot investigation is the first to histomorphometrically compare vital bone formation following bilateral sinus grafting with a biphasic calcium phosphate (BCP) (Straumann Bone Ceramic) to an anorganic bovine bone matrix (ABBM) (Bio-Oss) 6 to 8 months following graft placement. Twelve patients were selected. Following elevation of the lateral sinus walls, one material was placed in the right sinus and the other material was placed in the left sinus, as determined by randomization. Six to 8 months after grafting (with the same time frame used for each patient), a trephine core was taken from the grafted area and sent for histomorphometric analysis. Cores were obtained from 21 healed sinuses in 12 patients. Nine patients provided bilateral cores. Histomorphometric analysis of 10 BCP cores and 11 ABBM cores revealed an average vital bone content of 28.35% and 22.27%, respectively. The average percentage of residual graft particles was 28.4% in the BCP cores and 26.0% in the ABBM cores. The difference in vital bone formation was not significantly different (n = 9 patients, paired t test) between bilateral sinuses treated with the BCP and those treated with the ABBM. Histologically, both materials appeared to be osteoconductive and support new bone formation. Future studies are needed to confirm the ability of this regenerated bone to support dental implant maintenance over time.

View all posts by: Ralf Felder